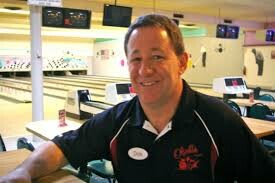 We welcomed in the 102nd year of Rotary bowling on Monday.  It was lighter than normal due to some kind of pandemic thing going on.  But the 6 teams of 3 and 2 extras ( Jack Windish & Matt Wilson) all had enough fun to make up for the shortfall in bowlers.  President Ralph Decker kicked off the season with the playing of the National Anthem.  He also took a quick survey to add a trivia question to the mix.  And the answer to “What is the average age of our league bowling tonight?” was 65 with the age range from 38 to 87.  Thanks to all who joined the Rotary league to keep the tradition rolling this year.  If you did not sign up, please stop in any Monday to cheer us on and tip a cold one.

The first 50/50 drawing raised $100 and $50 to the lucky winner Rose Cooper.  And on to the scores for the night.  Don Klackner was accused of practicing his bowling for the past 6 months during the shut- down because he rolled 9 strikes in his 1st game for a 257.  The chatter stopped when he rolled 101 pins lower in his 2nd game.  It was obvious that most had not picked up a bowling ball since last March when the league abruptly ended as only 5 bowled over average.  However, the newbie Lenny Lemkuhl rose above the rest with a 612 scratch series and 220 high game.  Dan Naes and Ralph Decker also joined the 200 club with games of 201 and 200.  Team Conway leads the pack after week one with 20 points.  Looking forward to many more weeks of bowling fun.  For those who have not signed up, consider joining anytime.  Things should be looking more favorable after Nov 3rd.