Rotary Golf League 2021 Season Has Come To An End 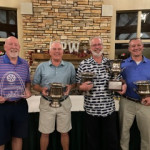 The Rotary Golf League just ended another very successful season at the Persimmon Woods Golf Club hosted by Derrick Wendling. We had beautiful weather and wonderful fellowship with 28 golfers for golf and dinner. This year was challenging due to the number of golfers wanting to play and the restrictions placed on us by the venues. Thanks to Blake Critzas and Mike Regan for all of their work in getting these outings scheduled and Dave Wicks for his handicapping skills and Earl Poe for handling our finances. We are looking forward to an even better year next year!

Listed below are the winners from our outing at Persimmon Woods:

Derrick also won the closest to the pin with a distance of 3′ 8″.

The team of Wicks, Jones, McNutt and Tinucci won the team event.

Our Annual award winners were announced and are as follows:

Steve Lafara won the Championship flight for the 15th time! This award will now be named the Steve Lafara Award.
Cris Connor won the A flight as well as the Most Improved Player.
Adam McNutt won the B flight.

We introduced an Annual Rotary Golf Fellowship Award and the first award winner is Bob Kocher!

Bob is such a wonderful ambassador for Rotary and for our golf league. It was a truly proud moment for Bob and for all of us for him to receive this award. Congratulations Bob and thanks for all that you do!

Congratulations to all of our winners!