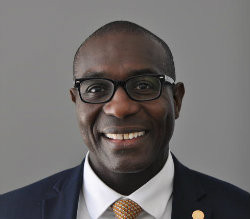 Join us in-person for lunch at the MAC Downtown OR by Zoom.

Lewis E. Reed began his public service career working for the City of St. Louis as the 6th Ward Alderman. As Alderman, Reed drafted and passed the legislation to revitalize the Lafayette Square neighborhood and worked with the neighborhood to make the redevelopment decisions.

By adopting a real vision for the 6th Ward, Reed sponsored legislation and worked to create development plans that ultimately resulted in over $1.7 billion of new development to the City of St. Louis and added hundreds of new housing units throughout the 6th Ward and contributed to the rebirth of Washington Avenue, which created the numerous loft living spaces available today.