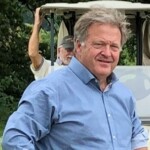 There must have been something added in the drinks last Monday September 28th since there were an unprecedented amount of high scores.  Team Conway was pistol whipped by Team Klackner with the following handicapped series scores from Le0nard Lehmkuhl bowling a 623, Don Klackner a 635 and Matt Weiss a 653.  Jeannine Conway whispered to Dan Conway that we need to buy Team Klackner drinks to throw off their game.  Dan Conway mentioned back it would probably only make things worse!  Matt Weiss had such a command of the lanes he was able to stare down any pins that were even thinking of still standing.  Probably was all of the lane jumping he was doing.  Team Klackner took all 20 points reducing Team Conway’s commanding lead down to one point!

Team Maddox had a great night against Team Lorenz taking 14 of 20 points.  Did Terry Werner get an extra ball or just bowl and extra frame?  Terry bowled a league leading 690 handicapped series with Mike Maddox bowling a 651.  That is just simply tough to beat with three bowlers.  Great scores were turned in by Doug Lorenz 638, Rose Cooper 633 and Kent Steinbrueck 617 but no match for the Maddox Machine!