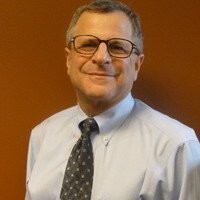 Ken Weintraub is a retired social worker currently volunteering with The Kaufman Fund veterans organization while continuing his passionate studies of sports and sports business.  He is the immediate past CEO of the Jewish Community Center and a former  Senior Development Officer at the Jewish Federation of St. Louis.  Ken received his BA in History at the State University of New York at Binghamton, and his masters in social work (MSW) at the University of Pennsylvania.
A native of Buffalo, NY, Ken literally “grew up” in arenas and stadiums.  Growing up in a family of active sports fans, as a  young boy who developed an interest in the business of sports complimenting his excitement over the games itself…These interests began by observing the concession business at stadiums and arenas alike, especially admiring the efficiencies of stand workers and in stadium vendors.
His older brother was the assistant ticket manager and an administrator for the Buffalo Bills in the mid 1960’s, and in 1968 Ken was placed in charge of hiring vendors for the sale of programs at Bills home games.  Between 1970/73, Ken worked to record “minutes played” for home games of the Buffalo Braves NBA team who are now known as the Los Angeles Clippers.
Over the past 5 decades, Ken has attended major events of all the major sports, nationwide, and has been fortunate to see games in a wide variety of the most storied arenas and stadiums, viewing classic teams coast to coast.  Visits to such stadia as the Los Angeles Memorial Coliseum, United Center, in Chicago, and the 2018 Army- Navy game in Philadelphia are examples of his recent sports travels.
Over the past 10 years, Ken has developed presentations on various aspects of “the business of sports” combining his knowledge of American history, sports and business to create presentations which focus on either the national or local portrayals of the business that supports the athletes at play – either locally or nationally.  He has presented on this topic at St. Louis Community College, St Charles Community College, Washington University – University College of Adult Learning, and for Oasis,
While serving as the  senior development officer at the Jewish Federation, Ken developed corporate relationships and sponsorships with the St. Louis Rams and the St. Louis Blues, along with the athletic departments of Maryville University and St Louis University.
Posted in Speaker